Northark Drama and the
Ozark Arts Council Present:
A Funny Thing Happened on the Way to the Forum

If I’ve told you once, I’ve told you a hundred times: do not fan the girls when they’re wet! But you’ll never learn; you’ll be a eunuch all your life!
– Marcus Lycus

This May, come to the Lyric for something familiar…something peculiar…something for everyone…yes, it’s “a comedy tonight”! In fact it’s the comedy of comedies that transcends time and space, A Funny Thing Happened on the Way to the Forum! Produced by NorthArk Drama and The Theatre Company of the Ozarks, in association with the Ozark Arts Council and under license from Music Theatre International, Forum brings a full 21 centuries of laughs from Rome to the Lyric stage on May 3, 4, 10, 11 at 7:00PM and May 5, 12 at 2:00PM. Tickets are available through TheLyric.org with Advance Tickets priced at $8 children, $10 seniors, $12 adults. Ticket prices at the door will be $11 children, $13 seniors, $15 adults. 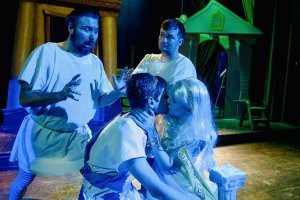 Set in Rome during the first century A.D., when the Roman Empire was in its youth, the film opens with one of musical theatre’s most famous songs, “Comedy Tonight,” performed by Pseudolus (Preston Garrison). The action, Pseudolus tells the audience, takes place in Rome around three adjacent houses: the house of Erronius (Clark Middleton), an old man who has been searching for his children who were stolen by pirates while they were infants; the house of Marcus Lycus (Jamie Taylor), a buyer and seller of beautiful women, and the house of Senex (Jim Gresham), a Roman senator, his wife, Domina (Ann Lemley), their son, Hero (Laine Hilliard), and the family slaves, Pseudolus and Hysterium (Michael Amburn). 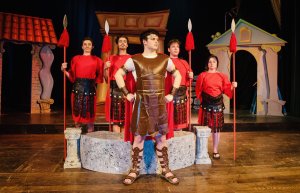 When Senex and Domina leave for the day, Hero declares his love for one of the ladies who live at his next door neighbor’s house, Philia (Katie Blessing), and that’s when Pseudolus begins to hatch a scheme to buy his own freedom. 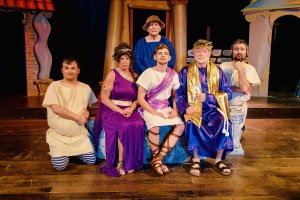 When the two visit Lycus’s house, once they get past the eunuchs (Donovan Walters and Nicholas Prpich) they meet Tintinabula (Cady Wheeler), a bell-wearing beauty; Vibrata (Kennedy Bottoms), an energetic, lively lovely with a leopard skin bikini; the Geminae (Faith Nix and Dante Lowe), a “matched pair”; Panacea (Nikki Forehand), a seductive dancer; and Gymnasia (Spree Hilliard), with a body upon which “a thousand dramas can be played.” They and the other lovely courtesans (Lena Rocole, Jenna Wilson, Rilee Young, Kaley Jones) are tempting, but Hero and Pseudolus are alarmed to find out that Philia has been sold to the great Captain Miles Gloriosus (Caleb Lord), and will be claimed that very day.

The confusion, comedy, and chases that ensue when Captain Miles and his illustrious soldiers (Kinder Hinrichs, Laken Rudelis, Andrew Coble, Daniel Hart, Wynn Mahoney) come to claim her will have audiences 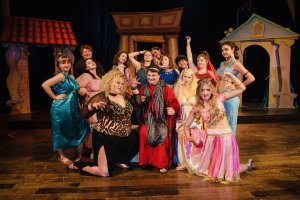 doubled over with laughter, attempting to keep up with what wackiness will occur next.

So join us again at the Lyric Theater for a fun evening, where “weighty affairs will just have to wait,” and where we promise to have “morals tomorrow, comedy tonight!” 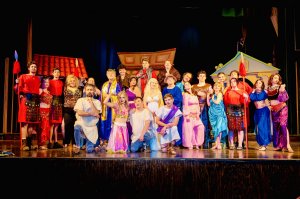