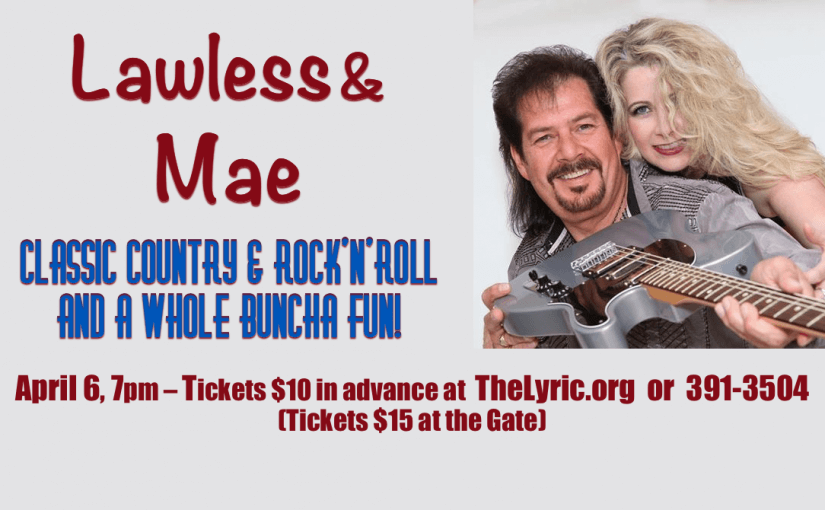 “We really enjoyed your singing. You both sound so good together and it’s obvious you enjoy what you do.”

Lawless & Mae, a classic country and rock n’ roll duo will perform at the Roots Music Palace of the Ozarks, Harrison, Arkansas’s historic Lyric Theater on Friday, April 6, 2018, at 7:000PM. Tickets are available in advance for $10; at the door, they will be $15. Don’t miss their superb quality and high energy entertainment, for lovers of country, bluegrass, and even rock n’ roll!

This incredible duo, which won the Josie Music Awards prestigious 2017 “Fans’ Choice” award, provides top shelf, world-class entertainment that wows crowds of all ages with a wide variety of tunes that span the decades. They are well known for performing many of the great duets of Country Legends like George Jones & Tammy Wynette, Johnny Cash & June Carter, Waylon Jennings & Jessi Coulter, along with favorites from great Country Legend soloists like Patsy Cline, Lynn Anderson, Merle Haggard, George Strait, Dolly Parton, and others.

Their show doesn’t stop there, though! Beside their Classic Country sounds, they perform Bluegrass, New Country, and traditional Rock’n’Roll, including great original material.

Jack Lawless has traveled the U.S. and Canada performing at casinos, on cruise ships, festivals and fairs. He has opened for many of the greats, like Kenny Rogers, Exile, The Gatlin Brothers, Lynn Anderson, Ronnie Milsap, Little Eva, Jerry Reed, Sawyer Brown, and many more. On May 27, 2012 at “Thunder On The Rock” in Monte Eagle, TN Confederate Railroad invited Jack up on stage to play guitar and Jack has since gone on to perform as a guest at several of their concerts. Jack not only sings great country but also performs songs from the 50’s and 60’s along with many popular rock n roll and R&B hits.

Do yourself a favor and go see Lawless & Mae…and listen to some real, traditional, Country and Gospel music!
– Douglass Chapel UMC

Rebecca Mae is an award-winning vocalist and entertainer who has traveled the North America performing as a featured soloist at casinos, fairs, and festivals, including featured-artist performances at the Country Tonite Theater in Pigeon Forge, TN, Silver Dollar City, the American Lawn Mower Racing Association festivals, and just about anywhere that fans of country music will gather to have a good time…like at our own “Roots Music Palace of the Ozarks,” the historic Lyric Theater!