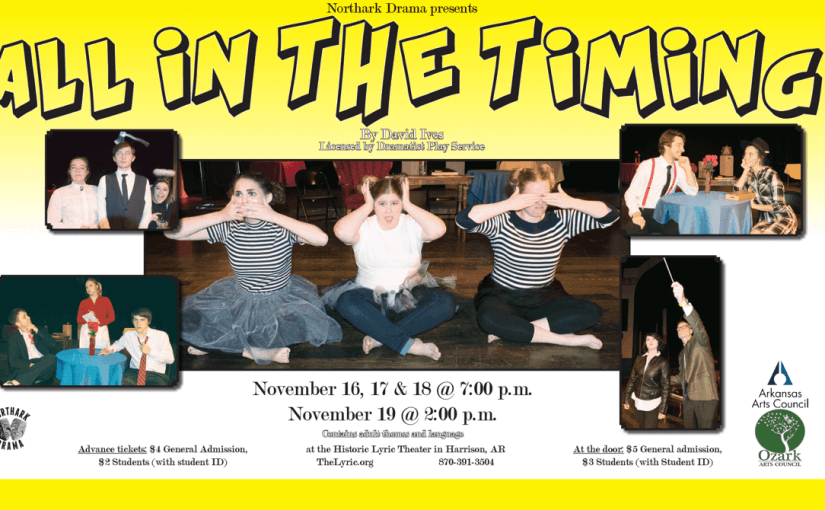 This fall, live at the historic Lyric Theater on the downtown Harrison, Arkansas square, Northark Drama brings to life a series of curious events that defy dimensions and transcend time. The award-winning All in the Timing, written by David Ives, is a collection of five one-act plays that detail happenings in apparently dissimilar worlds that are, upon deeper inspection, more alike than not.

Beginning this journey is the story of Bill (Jesse Janus), who sets his sights on an attractive young woman named Betty (Shelby Stracner). Bill tries flirting with Betty, but she only has eyes for…William Faulkner. When Bill begins to fail horribly in his attempted wooing, he is granted merciful aid by Mysterious Fate (Brianna Marcil) and her Magic Bell, which rings every time Bill sticks his foot in his mouth.

The setting fades (and the times change!) to a laboratory where an eccentric scientist has captured three chimps, intending the trio to “write into infinity,” if need be, until they create of their own accord the famous and much beloved Shakespearean tragedy Hamlet. This apparently eternal sentence brings the chimps to question their existence…and why they’re named Kafka (Callie Johnson), Milton (Raelyn Selvidge), and Swift (Stacy Fisher). Kafka is more than thrilled to attempt this feat, while Swift rocks the boat, and Milton tries to protect the scientist.

We are then swept into a darkened room where a young woman named Dawn (Jacklyn Walker) appears, quiet, nervous, and stuttering. She’s greeted by a mysterious man named Don (Carrie Armstrong), who speaks a language all his

own. As Don begins to teach Dawn his tongue in hopes of ridding her of her stuttering impediment, Dawn begins to realize that there is much more to communication than words.

The scene changes to a dimly lit diner where, under the greyness of a world with no concept of time, a sleazy man named Al (Landon Helsel) tries to order more than food from a waitress (Ariel Uildriks) who has more than once seen players like him. He is interrupted by his friend Mark (Jacob Kolb) who begins to explain the odd occurrences that have been happening to him all day.

In the final display of a

universe gone wild, the tale of a famous historical figure is on display. Trotsky (Matthew Joyner) is busy, feverishly writing at his table when his wife, Mrs. Trotsky (Kaleigh Billings), tells of him a very unfortunate event: that he died the previous day.

“I’m certainly enjoying working with this young cast. Out of all of them, only one has been in a small play, and all the rest are making their stage debut. These students are doing excellent work with David Ives’s material. These are very challenging scripts because of the way they are written, and the language is extremely hard, but their concentration, hard work, and dedication is sure to make this a fun evening at the theater!”

Come and spend your time with this wonderful cast as they spend their time(s) with us!