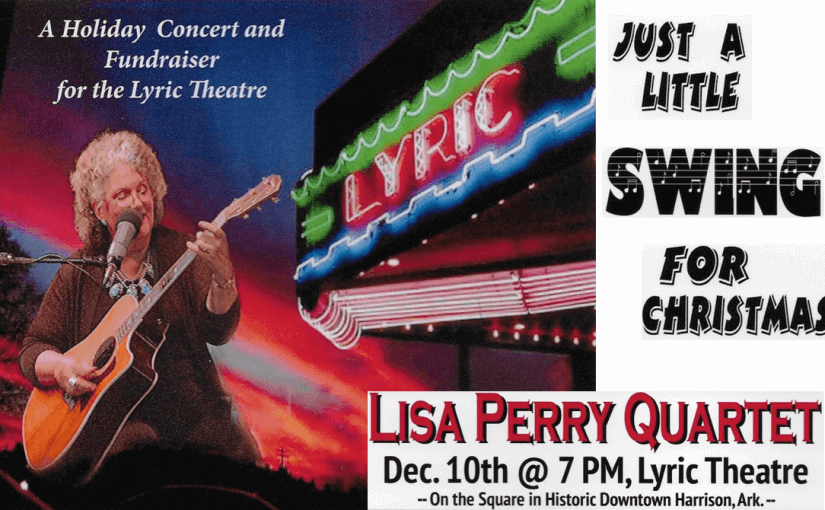 Lisa Perry is a true renaissance woman. Any one of her talents would be enough to build a career on, but instead of so mundane an undertaking, she has followed the more enlightened path of building a life that integrates them all to bring joy and beauty to others.

Lisa grew up in a family that loves music and started singing and playing at a very early age. The daughter of a Texas Methodist minister, Lisa was surrounded by music both at church and in the home. Her grandfather—a cook on the Santa Fe Trail—played fiddle tunes for old-time barn dances. Her brother, Randy Crouch, fronts the Oklahoma band “Flying Horse” and has, for example, played fiddle and pedal steel on Lisa’s “Canyon Rose” album.

Music, art and nature are closely linked in Perry’s world.
“My maternal grandmother in Post, Texas would take us out to the canyons and we’d draw

the things we saw,” Perry said.
“My dad’s mother was into working with thread and textiles.” Embroidery has been one of her favorite mediums for a long time. “My embroidery art is kind of the result of things both my grandmothers were teaching me when I was young,” she said.
~  Delania Trigg, Gainesville (Florida) Daily Register

As she and her husband relocated for work—from Texas to Florida to Arkansas, back to Texas and then back to Arkansas again—Lisa performed throughout the surrounding areas (and beyond), opening for headliners including Asleep at the Wheel and Jerry Jeff Walker. She’s also shared the stage with Bonnie Raitt, the Nitty Gritty Dirt Band, John Hartford and Vassar Clements.
Consider those names for a moment, and you’ll have an understanding of what the Lisa Perry Quartet brings; just for a start:

Lisa brings that same sort of mixture to her performances, giving everyone something to enjoy. Her smooth jazzy vocal style has delighted audiences everywhere. A big fan of Billie Holiday and Sarah Vaughn, Lisa performs favorites from the 30’s and 40’s along with many standards and a host of original material (she has written literally hundreds of songs). As the Cibola County Beacon (Grants, New Mexico) said, “Although it might be a little difficult to categorize, the music by Lisa Perry is captivating and different.”

Her renditions of nostalgic songs are enchanting to hear. It’s especially delightful when she sings such favorites as “On a Clear Day,” “As Time Goes By” and “Till There Was You.”
~  Chet Callero, The Daily Commercial (Leesburg, Florida)

Painter, gardener, embroiderer, singer, songwriter, instrumentalist Lisa Perry will bring her distinctive and captivating style to the historic Lyric Theater on the Harrison,

Arkansas square to perform with The Lisa Perry Quartet on Saturday evening, December 10, 2016 at 7:00. Thanks to the generous sponsorship of Beltone of Harrison, tickets for this concert, “Just a Little Swing for Christmas!” are only $5.00 and are on sale now through the OAC’s ticketing web site or by calling (870) 391-3504.