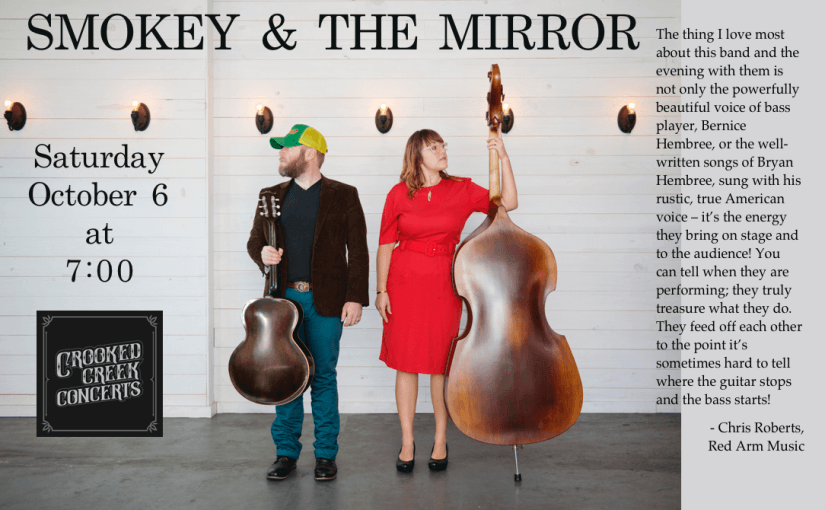 “Bryan and Bernice Hembree (Smokey & The Mirror) are making some of the best folk music today. The songs remind me of a time when Guy Clark was unknown and Ray Wylie Hubbard was still a folkie. Smart, cool and never pretentious.”

Crooked Creek Concert Association presents Fayetteville Roots Festival  founders, Smokey & The Mirror, who will perform at the Roots Music Palace of the Ozarks, Harrison, Arkansas’s historic Lyric Theater, on October 6 at 7:00PM. Tickets are available in advance for $10; at the door, they will be $15.

Smokey & The Mirror is husband/wife duo Bryan and Bernice Hembree. Based out of Fayetteville, Arkansas, Smokey & The Mirror has toured nationally and internationally over the past decade. The band has supported tours for Old Crow Medicine Show, The Wood Brothers, I’m With Her, Elephant Revival, John Fullbright, and many of their musical heroes. They tour most often as a duo, but also play many shows as a four-piece band. Whatever the configuration, the interplay of their two unique voices coupled with engaging, accessible songs form the foundation of Smokey & The Mirror.

The Hembrees work tirelessly on many musical and creative pursuits.  They are committed to others’ music as much as their own.  They have found that the most satisfying path to longevity in music is to put others’ art in the spotlight or to inspire others’ to find their voice.  They believe that the future of music is not winning the “me first” battle, but rather building community. To this end, they are founders and co-creators of the Fayetteville Roots Festival and also spent a year (2017) with Austin-based international songwriting collaborative, House of Songs, to pilot House of Songs Ozarks in Bentonville, Arkansas.

Crooked Creek Concert Association presents Fayetteville Roots Festival  founders, Smokey & The Mirror, who will perform at the Roots Music Palace of the Ozarks, Harrison, Arkansas’s historic Lyric Theater, on October 6 at 7:00PM. Tickets are available in advance for $10; at the door, they will be $15.

The thing I love most about this band and the evening with them is not only the powerfully beautiful voice of bass player, Bernice Hembree, or the well-written songs of Bryan Hembree, sung with his rustic, true American voice – it’s the energy they bring on stage and to the audience! You can tell when they are performing; they truly treasure what they do. They feed off each other to the point it’s sometimes hard to tell where the guitar stops and the bass starts!”  – 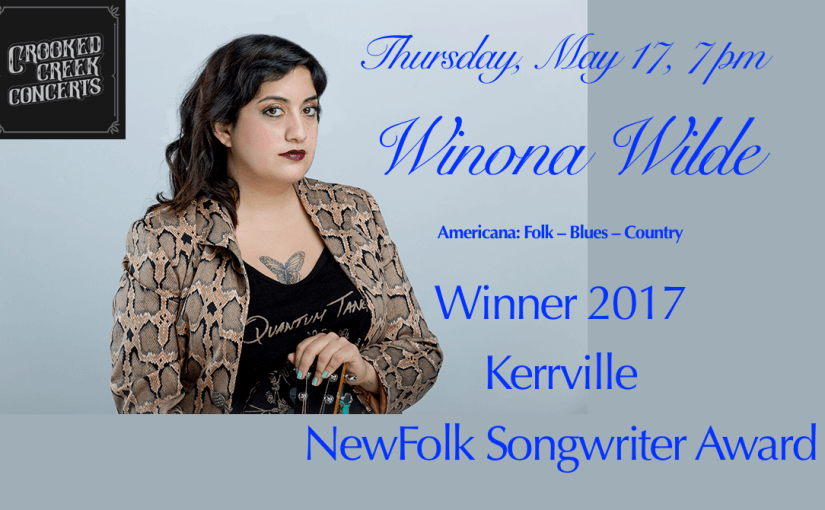 “Over simple, well-worn chords, Wilde’s voice sounds weary and wise, and yet still full of life…Her storytelling binds together personal experience and political ideas in relatable ways, the way only the best songwriting can.”

Crooked Creek Concert Association presents 2017 Kerrville NewFolk Songwriting Award winner Winona Wilde, who will perform at the Roots Music Palace of the Ozarks, Harrison, Arkansas’s historic Lyric Theater, on May 17 at 7:00PM, with special guest opener Fayetteville’s Elizabeth Scott. Tickets are available in advance for $10; at the door, they will be $15.

Karl Magi recently profiled Winona Wilde for Spinditty, so we’re going to borrow some quotes from his excellent article there. He shows her love for the Roots Music fans and culture: “If I had known all of these people and festivals existed when I started law school, I probably would have quit instead of suffering through it. The sense of community I have felt from the folkies is unlike anything on this earth. It has made me a better person.”

It’s not having gone to law school that makes people wonder most at her rise to prominence in the Americana scene—nor even her being Canadian, since that’s “North Americana,” at least—but the fact that she is a Canadian of Iraqi descent

Wilde (whose non-stage name is Noosa Al-Sarraj) says that music was a part of her life from her earliest days. “I do not come from a musical family, but opportunities for making music always came into my life at the right time. As a little tiny baby, I used to sing my mother’s lullabies back to her, and as a toddler, I was really good at clapping back rhythms and freakishly repeating back entire verses from the Koran, so my mother suspected there was something at play there.”

Her musical influences are wide-ranging. “I grew up on classical music. My faves were the moody, dense composers like Beethoven and Schumann. I spent hours every day alone with the piano, deciphering the language. To this day, I can still recognize a composer from just a few bars of music. Nobody generally cares when it happens, but it always feels like a little bit of a fist-pump moment.”

“When I hit my teens I got all the way into older blues artists like Ray Charles and Nat King Cole and then started to experiment with the edgier stuff like Tool and Nine Inch Nails. I loved the melodic metal my younger brother Sim listened to, he got me into Opeth, Dream Theatre and stuff like that. The heaviness of my lyrical content might have something to do with that.”

Magi writes: “Her transformation into a country/folk artist is something for which Noosa has an interesting explanation. She says, ‘My parents both worked a ton so we had a nanny whom we affectionately called Nana. She may have had country music radio on all day, so my young brain had the country music of the 80’s hammered into it without my even noticing. When I eventually heard John Prine and Loretta Lynn as an adult, all of this country music came pouring out of me.’”

Eleni Armenakis makes it clear in her review of the Wilnona Wilde album “Wasted Time” that as much as her music can reach the heights and depths of introspection and social commentary, her music is not one dimensional: “‘Buy a Round’ marks a change in the album, as Al-Sarraj laughs into a pure country number that fittingly rolls in and around itself. There’s more of a folk sound to ‘Black Forest Black Forest’ before ‘To The Corner’ finds a balance between the two to quietly see out the album.” Armenakis concludes, “Al-Sarraj knows what she wants to say and how she wants to say it. Despite the title, she’s clearly not wasting any time.”

“The best introduction to troubadour songwriter Winona Wilde’s wry sensibilities is through her delivered-with-a-wink song, ‘Chick Singer’…She sings with both exasperation and good humour, because, as we all know, sometimes the truth is so bleak, it’s hilarious. The same autobiographical song also references the blank stares she gets from people surprised to see an Iraqi-Canadian woman singing country songs. Wilde, whose real name is Noosa Al-Sarraj, fell in love with country music thanks to a nanny she had as a kid. Her kickass songwriting abilities led to win an award at the Kerrville Folk Festival’s New Folk competition this year—one of few Canadians to do so, and certainly the first of Iraqi descent.”

Winona Wilde will perform at the Roots Music Palace of the Ozarks, Harrison, Arkansas’s historic Lyric Theater, on May 17 at 7:00PM,with special guest opener Fayetteville’s Elizabeth Scott. Tickets are available in advance for $10; at the door, they will be $15.

Can you recall the first song you ever wrote?

From age 11-17, my subjects were mainly animals — for example, “Everything tastes like chicken when you’re not around,” a musical adaptation of Dr. Seuss’s One Fish, Two Fish, and a mini-opera about a donkey who eats spaghetti. Although one early song I remember went something like “darkness into darkness” and had some complex chord changes and a heavy subject. I gave it to my teacher and I never got it back, so I am really curious about what was going on in that song. Perhaps she passed it along to a psychiatrist. 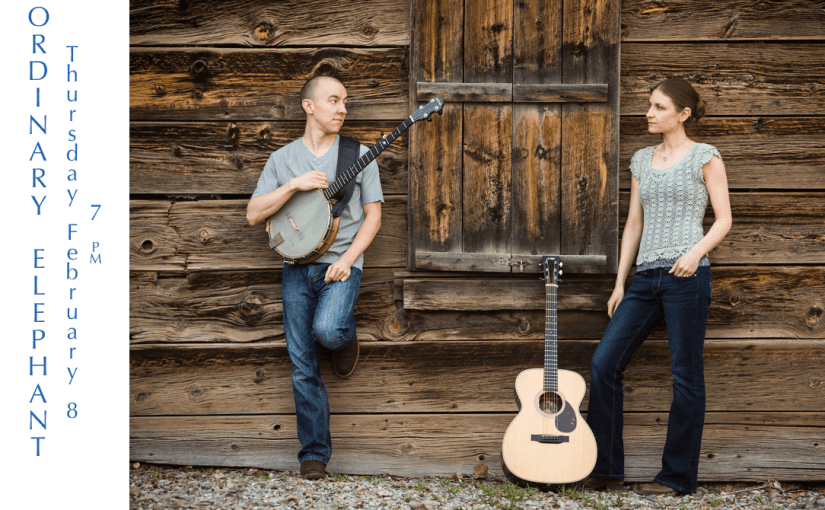 “Their harmonies, singing, the whole presentation…as genuine as it gets”

Brought to the Lyric Theater by the Crooked Creek Concert Association, Ordinary Elephant captivates listeners with their well-honed combination of insightful writing, effortless harmonies and intertwined clawhammer banjo and guitar. Husband and wife duo Crystal and Pete Damore have been performing together since 2011, but their 2017 sophomore release ‘Before I Go’ established them nationally and internationally. Quickly receiving the support of the folk community, the album reached No. 2 on the Folk DJ Chart for January of this year with their opening track ‘Best of You,’ not only setting the tone of the record, but capturing the No. 3 Song of the Month slot, and also secured them slots as a 2017 Kerrville Folk Festival New Folk Finalist and Falcon Ridge Emerging Artist. Crystal and Pete have lived the song’s message—being moved to create, perform, and put everything into what they do.

‘Before I Go’ is also exciting European ears. Upon his review of the album, Dani Heyvaert of Rootstime.be said “I remember when Gillian Welch and David Rawlings were here for the first time…I suspect that this couple is going to play in the same league in the foreseeable future.”

These were particularly welcome words given that it was Gillian’s playing that led to Ordinary Elephant’s particular configuration. From an early age Pete has been a guitarist, but once Welch’s “Hard Times” came across his car stereo speakers, the banjo beckoned. The realization of how well the clawhammer style he was unearthing complemented Crystal’s lyrically rooted singer-songwriter approach was a happy accident at the kitchen table one night, which led to many more nights of collaboration.

…their voices were made to go together and we’d all feel deprived if for some reason they chose not to sing together.
– Bill Aspinwall, Texas Music Journal

This collaboration of husband and wife, their connection, and their influences (such as Guy Clark, Darrell Scott, Anais Mitchell, Mary Gauthier, Cahalen Morrison and Eli West) all meet on stage. You see it, hear it, and then you find

yourself truly feeling it. Pete’s understated, melodic and mellow banjo weaves through Crystal’s steady and clean rhythm guitar, and poetic lyrics are purposefully delivered in rich harmony, “like their voices were made to go together and we’d all feel deprived if for some reason they chose not to sing together.” (Bill Aspinwall, Texas Music Journal)

After growing up a state apart, Crystal in Louisiana and Pete in Texas, the two found each other at a weekly songwriter night in Bryan, Texas in late 2009. After a couple of years of co-writing and developing their sound, Ordinary Elephant brought their music to Houston with a move in late 2011. They recorded their 2013 debut album ‘Dusty Words & Cardboard Boxes’ there, which garnered a nomination for Vocal Duo of the Year at the 2014 Texas Music Awards. Today, they happily call the road home after shedding most of their possessions in 2014 to take on nomadic life. Living full-time in a van and travel trailer with their dogs, they are exploring the country, creating, and uncovering attentive audiences with which to share the conversation of their music.

I’m impressed by many things, but mostly by the songwriting style…[the lyrics are] very economical and stripped down, but seem to effortlessly evoke the kind of poignancy and emotion someone expects of artists with more salt on their shoulders.